People have become fascinated by microbes in recent decades. Historically, microbes have been mis-characterized as the bad guys, and unfortunately associated with infections and diseases. However, more recently, microbiologists have discovered and understood the importance and benefits of microbes for life on Earth. For example, microbes in our bodies, particularly in our guts, have been shown to be incredibly important to the health of our bodies. Similarly, microbes in our soils are known to be crucial to the health of our gardens and plants. Our understanding and appreciation of microbes is continuously growing.

What is a microbe?

So, what is a microbe? A microbe (or micro-organism) is typically defined as an organism that is microscopic; those that are too small to be seen by the naked human eye. More specifically, microbes fall into two classifications: prokaryotes and eukaryotes. Prokaryotes are almost all single celled organisms and lack cell nuclei. Prokaryotes are sub-divided into two further groups: bacteria and archaea. Eukaryotes are organisms with organelle, such as nuclei. Not all eukaryotes are micro-organisms, although many are. Eukaryotes microbes are further classified into protists, fungi and algae.

Microbes live pretty much everywhere on Earth. Wherever there is liquid water; inside rocks in the Earth’s crust, on the ocean floor, and in our garden soils. Up to 10 billion microbes can be found in each gram of soil around plant roots (1). Microbial life in healthy soils includes huge numbers of bacterial and fungal species plus smaller numbers of algae, other protists, and archaea.

Top 4 benefits of microbes in our gardens

Here are the top 4 benefits of microbes in your garden:

1. Releasing nutrients into the soil

Microbes are essential for releasing nutrients into your garden soil where your plants need them. Microbes form a critical part of nutrient recycling in all ecosystems. Probably the two best known processes are those in the carbon and the nitrogen cycles.

Soil microbes are vital for the break down (or decomposition) of organic matter from dead plants and animals, forming a critical step within the recycling of carbon in our ecosystems. Fungi start the process by breaking down larger pieces of organic material. Other microbes then consume the organic material and incorporate it into the soil. Globally, soils contain more carbon than the atmosphere and plants combined. By regenerating our soils we have the opportunity to sequester more carbon underground and reduce the rate of climate change.

Nitrogen fixing microbes are found in the soil and some plant roots, such as peas, beans and other legumes. These microbes transform atmospheric nitrogen into fixed nitrogen. More than 90% of all nitrogen fixation is due to these microbes making them a critical part of the nitrogen cycle. Nitrogen is an essential nutrient for plant growth, however, it is also the most commonly limiting nutrient in plants. Without these nitrogen-fixing microbes it would be impossible for plants to get the nitrogen they need to grow. Within a plant, nitrogen becomes part of amino acids and then into proteins. Globally, plant proteins form a major source of proteins consumed by humans and other animals.

Without microbes, it’s obvious that the carbon and nitrogen cycles would not exist as we know them. But did you know that many more natural cycles are also dependent on microbes? The illustration below gives some insight into the wide importance of microbes in the oxygen cycle, water cycle, as well as phosphate, potassium, iron and calcium conversions. Quite clearly, microbes are essential for releasing nutrients and elements into our soils where our plants and gardens need them.

As shown above, microbes are critical for releasing nutrients into the soil, but did you know that microbes are also essential to help plants uptake these nutrients? Most plants rely on mycorrhizal relationships to obtain nutrients from the soil. Mycorrhizae are symbiotic partnerships between plant roots and certain soil fungi. The fungi grow in fine hairs, finer than the smallest root hair, and act as crucial pathways transporting nutrients, moisture and carbohydrates through the soil to plant roots. Why do the microbes do all this work for the plants? In exchange for a treat! A plant’s roots give off substances that the microbes can use such as sugars and amino acids; a crucial (arguably the most crucial) symbiotic relationship in nature.

Without soil microbes, plants would not be able to get all the nutrients and water that they need to thrive. 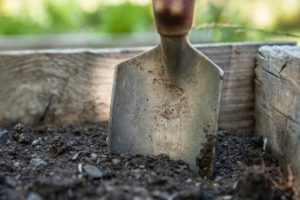 Healthy soil is rich in organic matter. This organic matter is critical to help the soil retain moisture and nutrients and to feed the essential soil microbes. When soils are lacking in organic matter many gardeners and farmers become reliant on fertilizers, pesticides and herbicides.

Until recently it was thought that dead plants and animals were the main source of organic matter in the soil. However, recent advances in understanding of soil formation suggests that the most persistent forms of soil carbon are primarily from dead microbial bodies, rather than from dead plant parts. While plant matter forms the original source of carbon in our soils, it is bodies of microbes that ate the plant matter that ensure at least some of the carbon is retained in the soil. It is actually microbes that form the basis of a healthy soil structure, rich in organic matter.

Mycorrhizae, which are essential for plants in the uptake of nutrients, are also critical to help plants defend themselves against disease. Farmers and gardeners have long known that certain soils provide protection to plants from specific soil-borne diseases. Such soils are often called disease-suppressive soils. It is believed that beneficial microbes within the soil create inhibitory effects against particular disease-causing pathogens. These beneficial soil microbes help suppress diseases. In addition, the healthy microbial activity will create healthier, more productive soils which, in turn, will allow plants to grow stronger and healthier and be more resistant to pests and diseases.

How to increase microbes in our gardens

You will by now realize how important it is for your soil to have a thriving microbial population. But how do ensure that there are billions of beneficial microbes in your garden? Here are our top 3 tips for increasing the number of microbes in your soil.

Like any living thing, microbes need a source of food. Compost provides food for your microbes. Not all organic matter is created equally. When it comes to feeding microbes, food waste is their preferred food. Good quality, homemade compost is already teeming with microbes. So, by adding compost to your soil you are adding billions of beneficial microbes and a large source of food. Note that many store-bought, bagged composts are sterilized prior to bagging. This sterilization process kills off many (if not all) of the beneficial microbes. Good quality homemade compost is the best for your garden. Bokashi compost is richer in effective microorganisms than any other form of compost.

Mycorrhizal is also available in powdered form from numerous online sources. Again, sprinkle directly on your soil when adding new plants or seeds.

Bokashi tea and other compost teas are also teeming with beneficial microbes. Adding these to your garden is another simple, yet effective, way of boosting the microbe population.

No-dig (or no-till) gardening is exactly as the name suggests; gardening without digging the soil. No-dig gardening supports the microbes in your soil. It mimics the natural processes under which soil is formed. Digging and tilling soil damages the fine mycorrhizal fungi and other microbial life in the soil. Leaving soils undisturbed allows the microbial life (and other soil organisms) to thrive. Learn how and why no-dig can help your garden (read more).

Order now! Find all your bokashi composting supplies in our online shop.

The importance of healthy soil